Okay, not North East news, but worthy of a mention, for sure!

We received the following email from Steve, who was quite understandably over the moon at catching what looks to be a new British Shore Caught Record bass…..

Hi,I’m Steve on the Isle of Wight.Last night, 24/11/07 at 11pm, I netted  this bass, officially weighed in at 19lb 11 3/4oz at Scotties Tackle shop in Sandown.The bass was caught on Sandown on 20lb mainline and 18lb trace made by myself ten mins before I got this monster. I nearly lost my rod as it went flying toward the sea, but managed to catch the butt.The fish took about three mins to get on dry land, but the first net we had to hand was too small, so a young lad legged it to our hut to get the big drop net. It took my good friend Allan Beanie and my  self to land it,  with five other people shinning there lamps over so we could see what was happening. So far in 2 years, we have had 2 double figure bass from the Sandown Pier – first was Allan Beanie with a 14lb bass. Then Rob Bennett had a 11lb this year. Then my beast – this has been checked to be the new british shore bass record.Steve 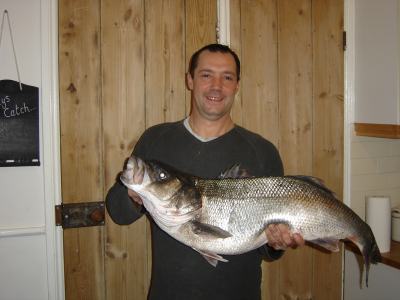 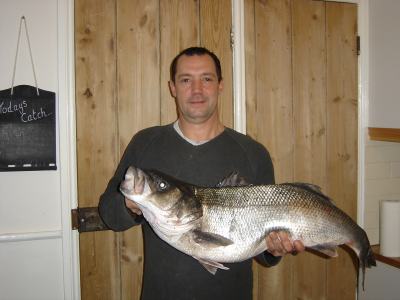