Roz Savage on the watrerOur Champion at age 37 rowed the Atlantic and now at 42, is being honoured in advance of her attempt to row from Kiribati, a small island country in the South Pacific, to Australia for the third and final leg of her Pacific crossing. This adventure is scheduled to start April 15 this year. 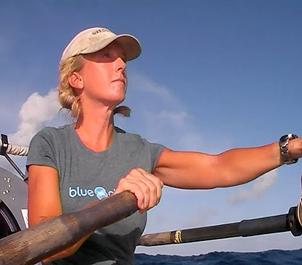 Roz is not just an ocean rower, she has written a book, produced a film and is a strong environmental advocate since her realization of the need to be concerned of our impact on the planet. She walked 250 miles from London’s Big Ben toward Copenhagen to attend the United Nations Climate Change Conference in late 2009 and isa UN Climate Hero and Athlete Ambassador for 350.org. Now she is on a speaking tour in America and also getting ready for her row to Australia.

The Outdoor Champions programme is designed to reward individuals whose accomplishments highlight the blend between conservation and recreation and comes with a cash prize of $1,500 and a supply of Aquapac’s 100% waterproof protective cases.

“We’re so very happy to honour Roz, her efforts on the oceans and the work she’s doing for environmental causes,” said Tim Turnbull, CEO of Aquapac. “She embodies our Outdoor Champions programme – people who live their lives outside, help others connect to the great outdoors and instill a greater conservation ethic in all of us.”

Ros SavageThe Aquapac cases greatly helped Roz in her rowing adventure. “I don’t know how I would manage without my Aquapac bags. After spending cumulatively over 300 days on my rowboat, I no longer believe in the word ‘waterproof’ except when it comes to Aquapac,” said Roz. “I’m a big proponent of Aquapac, and am excited to have them honour me as one of their Champions.

In 2005 our British Champion, was the first solo woman to compete in the 3,000-mile Atlantic Rowing Race and the sixth woman to row solo across the ocean. Later in 2008 she became the first woman to row solo from California to Hawaii and in 2009 she continued her Pacific bid by rowing from Hawaii to Kiribati. This year we anxiously support our Champion on her voyage across the Pacific.

100% PVC-Free
Aquapac doesn’t use environmentally harmful PVC in any of its products. Made of Thermoplastic Polyurethanes (TPU), the cases have less environmental impact, and stay supple and crack-free even in sub-zero temperatures.