The 2008 Round Britain Power Boat Race finished in Portsmouth on Monday 30th June with only two boats completing the entire 1,600-mile course, following the cancellation of the second leg due to adverse weather conditions.

One of the boats was Pulsar Racing’s Suzuki powered Ribcraft RIB ‘Vampire’ (Race No. 102) skippered by Major Greg Marsden, who decided to challenge the elements and carry on with the original course along with one other boat – a 42ft Targa called Buro (Race No. 15), powered by two Volvo inboards.

At just 7.8m ‘Vampire’ was the smallest boat in the Round Britain fleet but Greg and his crew were confident in their own abilities and the capabilities of ‘Vampire’, which was powered by a standard Suzuki 300hp 4-stroke outboard.

Having punched through the head sea to Falmouth and taken on the turmoil of Lands End the Suzuki outboard powered ‘Vampire’ across the Bristol Channel to Milford Haven, completing the leg ahead of the Targa. 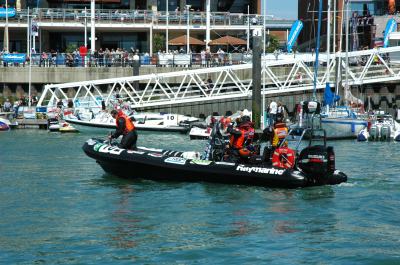 Greg and his crew (with sense of humours always intact) claimed the moral victory, arriving back in Portsmouth on Monday afternoon scoring an overall position of twentieth out of forty-seven, with a total elapsed time of 31 hours, 54 minutes and 11 seconds.

Greg said "Unfortunately, the second leg of the race (Plymouth – Milford Haven, Sunday 22nd June) was cancelled due to bad weather, which meant that most of the boats were loaded on to trailers and driven to Milford Haven in readiness for the third leg."

He continued, "We were determined to complete our Round Britain challenge and having done a detailed weather estimate we made our way down to Lands End on Sunday, stopping off in Newlyn for a Chinese. We left Newlyn for Milford Haven at 3am on Monday morning arriving at 7.35am, just in the nick of time to make the drivers brief and re-fuel. The Suzuki was faultless throughout and ready to do the next 200 miles for the third leg to Bangor, Northern Ireland."

Greg, who is Managing Director of 2012 Marine Ltd, Technical Director for Team Pulsar and a serving Royal Engineer Officer, commented, "I have served in some of the most challenging environments across the world and this experience ranks up there with the toughest! However, I must give credit to our crew both on the water as well as our shore-side support and also pay tribute to the quality of the equipment we were using. The Suzuki 300hp outboard, Ribcraft Hull, Ullman Seating and Raymarine electronics proved to be a package that demonstrated robustness, resilience and excellent performance."

He continued, "Vampire handled the conditions without missing a beat and our standard Suzuki 300hp V6 4-stroke outboard sang. Vampire successfully completed the full Round Britain course, including Lands End – a feat that I am extremely proud of. We improved our overall position on each and every leg of the race and only by surrounding myself with quality in terms of man and machine would this result have been possible."

Richard Whittaker, Business Development Manager for Suzuki’s Marine Division said, "The stamina and seamanship of Greg and his crew was amazing. This was an endurance event that tested crews and equipment to the limit. This really showcases the reliability of Suzuki’s 4-stroke outboards, and the excellent performance the standard engine delivers. To have powered the only RIB that fully completed the course is something very special indeed."